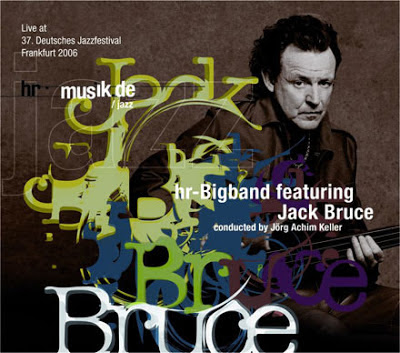 In October 2006, Jack Bruce performed a one-off concert with the hr-Bigband, the big band of Hessischer Rundfunk, the public broadcasting network of the German state of Hesse. They invited him to revisit several stages of his career in a new setting, and the results could be witnessed at the Frankfurt Jazz Festival — and on this live recording. The album — which curiously lists the big band as the main performer, with Bruce as a „featured“ musician, even though it’s Bruce’s show all the way through — sounds a bit odd at first, despite its good quality of recording: maybe it’s just Bruce’s idiosyncratic singing, which sometimes creates the impression that he’s not fully aware of any band playing behind him („Smiles and Grins,“ „Deserted Cities of the Heart“), or maybe it’s the reverb on his vocals, which at some points gives the impression that they’re overdubbed. They’re not, of course, and once you get used to the mix, this diverse and energetic performance can be fully enjoyed. Not surprisingly, most of the songs are deeply rooted in the blues, and also not surprisingly, Bruce revisits some Cream tunes, among them Willie Dixon’s „Spoonful“ and „Sunshine of Your Love.“ The large horn section isn’t as prominent as could be expected — on several tracks, they simply provide a lush backing to the rhythm section („Rope Ladder to the Moon,“ on which Bruce plays acoustic guitar). On a trio of songs in the middle of the concert, Bruce switches from his electric bass to piano („Theme from an Imaginary Western,“ „Milonga,“ and „The Consul at Sunset“), but the best moments of the performance are the powerful renditions of „Spoonful“ (with a wild guitar solo by Martin Scales) and „We’re Going Wrong.“ The unusual setting seems to energize Bruce, and the balance between the familiar and the unexpected makes for an exciting listening experience.