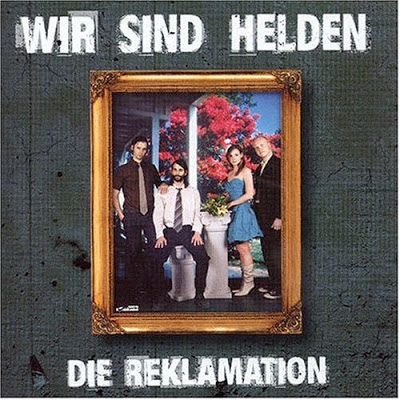 If one single record was responsible for the renewed popularity of German-language pop and the subsequent emergence of numerous new acts, it was Wir sind Helden’s 2003 debut, DIE REKLAMATION, which quickly became one of Germany’s best-selling albums, shifting over 800,000 units. Listening to the album, it is easy to hear why: the 12 songs on the CD aren’t only appealing musically — mixing keyboard-driven New German Wave pop with rock and funk to infectious results — but also lyrically, with clever wordplay, funny one-liners, intelligent observations about society, and introspective accounts of more personal subject matter. The two best-known songs are the first single, „Guten Tag“ — a catchy synth-based funk song and a biting satire of consumerism („Tausche blödes altes Leben gegen neue Version“ — „Will exchange stupid old life for new version“) — and the more anthemic power ballad „Denkmal“ (Memorial), which draws an original metaphor of a relationship set in stone. The other songs offer enough inspired writing, too: the catchy pop of „Müssen nur wollen“ („Have to want“) — whose stab at a performance-oriented society was largely misunderstood as a motivational song! — or the sly groove of „Rüssel an Schwanz“ („Trunk to Tail“) with its synth squeaks. There are a number of slower, more quiet numbers, and they work well within the context of the album. Wir sind Helden’s sound often drew comparison to early Nena (also thanks to the fact that both are fronted by a woman) and other New German Wave acts, often employed by critics to suggest the group was a mere rip-off, but Helden incorporate the style into their music with a healthy bit of irony, and they even manage to keep the difficult balance between tongue-in-cheek fun and serious earnestness. DIE REKLAMATION is easily one of the best German pop albums — good enough that Wir sind Helden themselves, despite continuing popularity, didn’t manage to reach its quality again on subsequent releases.

This review was written for the All-Music Guide on September 13, 2007.