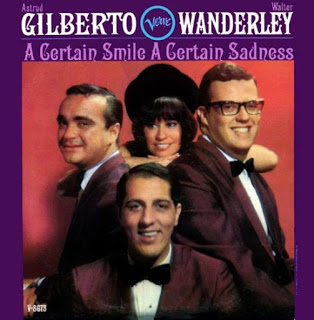 In 1966, the bossa nova craze was at a peak, and A CERTAIN SMILE, A CERTAIN SADNESS marked a collaboration between two of its biggest stars — vocalist Astrud Gilberto, brought to fame by her classic rendition of „The Girl from Ipanema,“ and organist Walter Wanderley. Even though the album is good, it is not as exciting as one might hope. While the music is remarkably innocent and sweet, with just a little underlying touch of sadness beneath the joyous, even naïve, surface, Gilberto and Wanderley do not always seem to work together on these tracks — it often appears as if each is performing in a universe of his or her own. That being said, there are many bright sides to the album, too: Wanderley’s organ playing is as enthusiastic and fluffy as ever, while Gilberto’s singing (in both English and Portuguese) remains smile-inducing. Both manage to create an incredibly warm sound, and when Wanderley plays some piano (as on the beautiful „A Certain Sadness“), you can sense a spark between the two. So, while A CERTAIN SMILE, A CERTAIN SADNESS might not be the most successful album of all time, it is still a nice record that fans of either Gilberto or Wanderley will want to have. And — even though one tends to use the word „cocktail lounge music“ — their rendition of „Tristeza“ is simply irresistible, easy listening or not.

This review was written for the All-Music Guide on September 15, 2002.