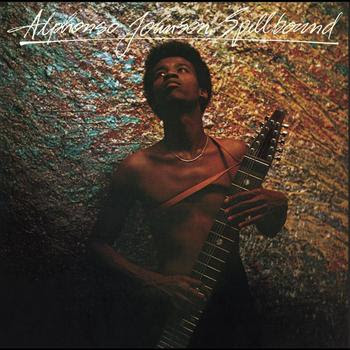 After YESTERDAY’S DREAMS and MOONSHADOWS, SPELLBOUND is Alphonso Johnson’s third and, unfortunately, last album (to date) as a leader. Whereas MOONSHADOWS featured a lot of famous guest players, such as Bennie Maupin and Patrice Rushen, SPELLBOUND features a band consisting of relatively unknown musicians: Kevin Shireve (guitars), Clyde Criner (keyboards), and David Igelfeld (drums and percussion), with Pat Thrall adding some guitar solos to some tracks. The record is a great showcase for Johnson’s bass playing, alternating between soloing („Nomads“), lead bass („Face Blaster“), and supporting duties. The band delivers a very solid performance, though they never get as much spotlight. For all of Johnson’s technical brilliance, he seems to be more concerned with the songs themselves and their respective moods, though, and so he restrains himself quite often from showing off, which helps a lot. Most of the tracks are jazz-rock pieces somewhere between Romantic Warrior and Goblin, but there are a couple of ballads added for good measure. On four occasions, Johnson also sings, and while he has a rather weak (albeit pleasant) voice, it actually fits the songs very well: even the faster pieces on this record always retain a quiet aura of melancholy, and Johnson’s tender voice and peculiar melodies add to the charm. The pensive „Moonlight Conversations“ is a gem, while the six-part „Earthtales Suite“ shows the artist’s ambitions, as it ranges from almost classical impressions (his bowed bass playing nearly passes as a whole string section) to synth noise effortlessly. Actually, the whole album works as a suite, especially since the last track reprises the first one, and while it is not a must-have, it certainly shows ambition and originality. Unfortunately, SPELLBOUND is not available on CD.

This review was written for the All-Music Guide on October 30, 2000.