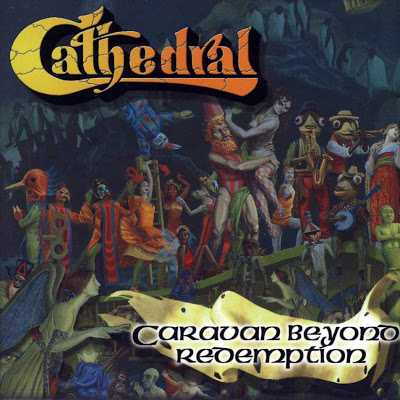 CARAVAN BEYOND REDEMPTION is a captivating album for all of its 70-plus-minute running time. Starting from their usual brand of doom metal, heavily influenced by Black Sabbath, but boasting an original, individual style at the same time, Cathedral throw in various surprises this time to make things interesting. While the „stoner“ rock style dominates the sound, ’70s funk infects the rhythms — most of these songs feature a (more or less sublime) groove that is irresistible. Sometimes insidious wah-wah guitars recall „Shaft“ („Freedom,“ „Revolution“), while on other occasions a bongo section adds spice („Voodoo Fire“). Various voice recordings appear, and „Captain Clegg“ is a Hammer Horror homage, complete with movie samples. „The Caravan“ is an affectionate nod to Cathedral’s idols (remember „Planet Caravan“?). All of these elements are integrated organically into the music, which nonetheless is a crushing fest of heavy yet melodic riffs. Vocalist Lee Dorrian’s voice is cleaner this time (actually intelligible), going with the harmonies instead of fighting against them — though he doesn’t give up his growling shouter persona. The lyrics mostly reward investigation, with a lot of social commentary and inspired madness; the words of „The Omega Man“ (greetings from „Iron Man“) are truly eerie, presenting a mixture of paranoia and apocalypse. After the last song (which surprises the listener by getting slower instead of faster) is over, there’s five minutes of silence (Cathedral’s extended version of „4’33“?), followed by some senseless crowd noises. Never mind this hidden „track“; the 12 songs on CARAVAN BEYOND REDEMPTION are inspired and intelligent and definitely worth seeking out.