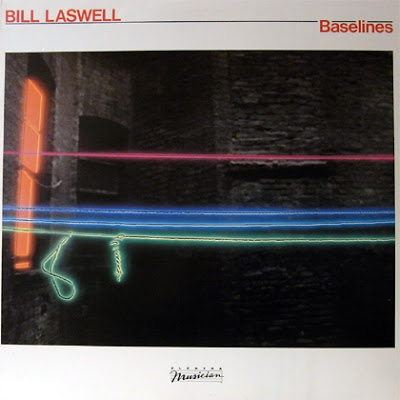 Even though Bill Laswell was already immersed in numerous projects since the end of the ’70s, including leading his loose ensemble Material, he didn’t release a solo record until 1983, and BASELINES was quite a strange album. On the one hand, there’s „Upright Man,“ one of the most infectious grooves Laswell has ever conceived, boasting ace bass playing and a weird taped sermon as sort-of lead vocals. Then there’s „Work Song,“ which is funky and catchy and features Phillip Wilson’s somewhat off-beat drumming (pun intended). The other tracks are more experimental, weird, and don’t catch on as well — although they all reward repeated listening, for at first the listener might get lost between Ronald Shannon Jackson’s irate drumming, Michael Beinhorn’s acid-drenched synths and snippets of tapes and shortwave, the stuttering horns of George Lewis and Ralph Carney, the undescribable contributions of Fred Frith, and the vocalisms and percussion (rhythmic and non-rhythmic) David Moss provides. It’s an interesting record, but it’s not essential listening, and beginners or fans of Laswell’s less avant-garde music won’t get much out of this. If the somewhat comparable MEMORY SERVES by Material left you craving more, you might want to give this album a try.

This review was written for the All-Music Guide on November 28, 1998.