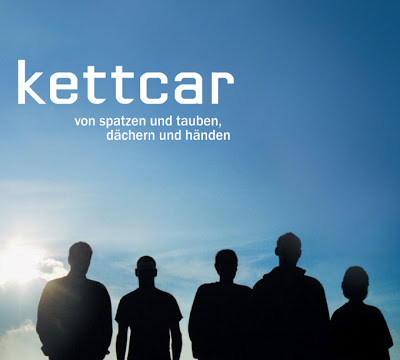 When Kettcar released their debut album DU UND WIEVIEL VON DEINEN FREUNDEN on their own label Grand Hotel in 2002, the album wasn’t an immediate success — but it steadily became one, and as a result, the band received so much attention that the release of their follow-up album in 2005 was announced on TV’s Tagesthemen (a serious news program!) as an „important release.“ So, expectations were high for VON SPATZEN UND TAUBEN, DÄCHERN UND HÄNDEN (the title is a play on a German proverb), and Kettcar faced them by following the sound of their first album with few alterations. This time around, there are a few more acoustic-based songs, a few more slow songs, but altogether, the album continues in the same vein as before. Which means that, if you liked Kettcar the first time around, you won’t be disappointed, and if you didn’t get their appeal before, the sophomore effort is unlikely to convert you. To be sure, Kettcar’s music is mainstream indie rock/pop, melodic in its core, with strummed guitars and introspective lyrics. After a while, the sameness of the band’s sound becomes tedious, since there are few surprises, and everything feels precisely controlled — still, the band manages to instill its sound with warmth and an overall feeling of sweet melancholy. The album’s best songs can be found in its first half — the first single, „48 Stunden“ („48 hours“), a quiet little song about a relationship which ends because she accepts a job offer in a different city, is as strong as „Die Ausfahrt zum Haus deiner Eltern“ („The Exit to Your Parent’s House“), which captures a feeling of uncertainty and indecision. Most of the songs are little short stories, and the lyrics are the band’s strong suit, even though on some occasions, the pathos overwhelms the good intentions a bit. VON SPATZEN UND TAUBEN, DÄCHERN UND HÄNDEN may not be as important a release as some might lead you to believe, but it certainly stands as an intelligent, immediately listenable effort by a band that just needs to loosen their sound a little bit to become truly remarkable.

This review was written for the All-Music Guide on September 9, 2007.