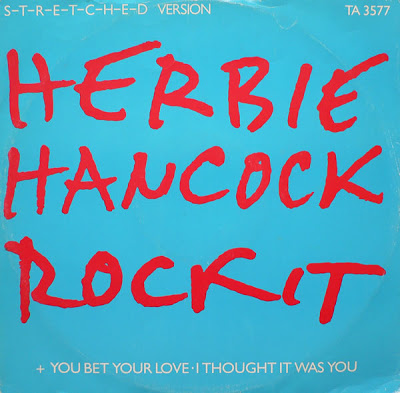 This 12″ single was released in 1983 as an advance for Herbie Hancock’s album FUTURE SHOCK, presenting its hit „Rockit.“ Even though the cover says that the track is featured in a „stretched version“ (on the disc label, it’s called the „long version“), this simply refers to the fact that there’s also a three-minute edit of this track available. The version included here is exactly the same as the album version of this Grammy-winning song which propelled Hancock onto the charts, made Bill Laswell an „in“ producer, became the unofficial anthem of the breakdance craze, and presented the turntable as a solo instrument for the very first time. Not to mention that the accompanying video is justly considered a classic.

The two tracks on the B-side are taken from Hancock’s disco era: „You Bet Your Love“ (from FEETS DON’T FAIL ME NOW, 1979) and „I Thought It Was You“ (from SUNLIGHT, 1978), an earlier hit. While the merits of Hancock’s disco recordings are rather controversial, there’s a lot to be said in favor of them — tight grooves, pioneering use of the Sennheiser vocoder, and (on the second track) kicking horn arrangements can be witnessed here. Still, both of these tracks are the album versions, which means that there’s no real need to hunt this 12″ single down.

This review was written for the All-Music Guide on February 6, 1999.