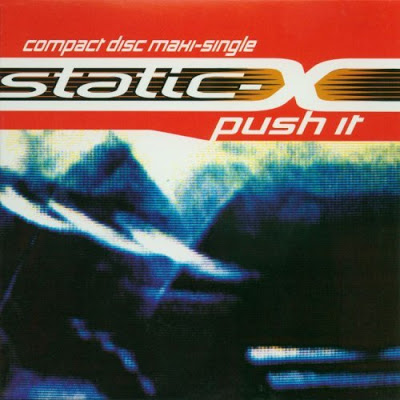 Releasing the song „Push It“ as a single was an excellent choice for the industrial metal group Static-X, since the track perfectly blends all the different elements the group has to offer: rhythmic, even robotic, riffing, an irresistible groove, Wayne Static’s staccato growling and shouting, plus a subtle tongue-in-cheek attitude — on „Push It,“ the group’s self-dubbed „evil disco“ is in full effect. The CD single offers a number of nice little extras: apart from a live version of „Bled for Days“ (nice, but not too exciting), there is the previously unreleased studio track, „Down,“ which is crazy, frantic, and hilarious. Additionally, the single features two remixes of the title track: the „Death Trance Mix“ by Fear Factory’s John Bechdel, which emphasizes the electronic aspect of the group’s sound and cleverly shifts the song’s rhythmic pattern around, and the „Crucified Dub Mix“ by Mephisto Odyssey, which nicely carries the listener away, with elements of the original track appearing, disappearing, and echoing while a infectious dub groove creates a trance effect. Furthermore, the disc has two videos to offer: a live video of „Bled For Days,“ which is nice, even though it has some heavy continuity problems (watch Wayne’s clothes), and the excellent video clip for „Push It.“ Unfortunately, while the clips are presented in high quality, they cannot be watched full-screen. This, however, is the only point of criticism about this CD single, which is a must for everyone who likes the band.