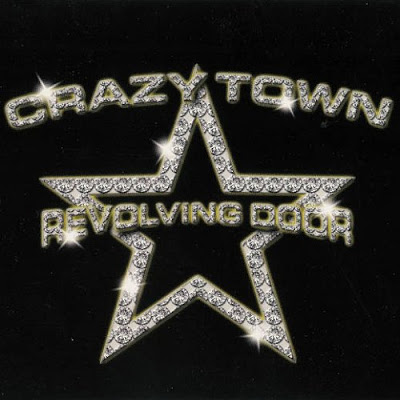 The sad thing about the fourth Crazy Town single, „Revolving Door“, is the fact that, after the enormous success of the song „Butterfly,“ a smooth, immensely catchy pop ditty, the band seems to concentrate on its light side — which, as a full listen to the album THE GIFT OF GAME quickly shows, is not exactly representative of the band’s sound. On the album, heavy songs prevail, with the occasional soft song thrown in for good measure; however, the first two singles, „Toxic“ and „Darkside“, both fine exponents of the nu-metal genre, were largely ignored, and thus the band seems stuck to ballads. While these songs provide a good counterbalance on the album, a quick comparison of „Butterfly“ and „Revolving Door“ show just how similar the songs actually are. Just like its predecessor, „Revolving Door“ features a soft, looped guitar lick and smooth beats, and displays the same relaxed mood. Whereas „Revolving Door“ is not a bad song by any means, it too closely resembles „Butterfly“ to be a real standout. The CD single features a remix by Jay Gordon of Orgy, the „Astro American Mix,“ which manages to be much better than the original: A great guitar riff, futuristic synth sounds, and a much more interesting rhythmic pattern make this version a winner, especially for repeated listening. The second bonus track is a live version of „Butterfly,“ which only serves as a reminder to avoid possible Crazy Town live albums: The smooth flow of the original gets totally lost, and the vocal delivery is extremely monotonous. Furthermore, a video of „Revolving Door“ is included, directed by Gregory Dark, which is a nice bonus, even though the clip is not that good. There are dozens of gorgous women to be seen, but the video itself is somewhat silly, and listening to these guys is much more pleasant than actually seeing them.