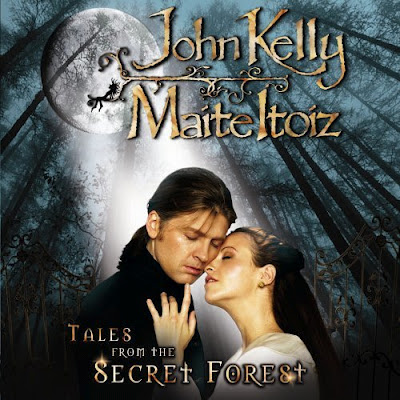 John Kelly was a member of the Kelly Family for 25 years, and that fact alone will be a warning to most listeners. His first solo album is a collaboration with his wife, Spanish singer Maite Itoiz, and TALES FROM THE SECRET FOREST is a medieval fantasy-themed collection of mostly ballads, featuring, among others, Itoiz’s operatic vocals, a few rock and folk elements, classical and Spanish guitars, Celtic harp, medieval percussion, Galician pipes, whistles, cello solos, and a full-blown orchestra, with songs written in English, Spanish, Italian, German, and, oh yes, Latin. You guessed it: the whole album is so overblown and bombastic, the arrangements are so desperately epic, and the lyrics are so ridiculously kitschy that the record makes Celine Dion look like a subtle, low-key singer/songwriter in comparison. Early on, there’s the love song „Hey Little Girl“ (fortunately, it’s not the Icehouse tune), where Kelly asks, „Hey little girl/Where do you come from?,“ and Itoiz sings, „I come from the valley, where flowers always grow,“ to which Kelly replies, „I come from the city/Where flowers never grow.“ It makes you wonder how these two people’s relationship is going to develop once they outgrow their fascination with flowers. A few songs later, they attempt to tackle the evils of the real world (on „Scandals,“ one of the very few faster-paced songs on the album), and in the face of starvation and drugs, they come up with the lines „Sometimes it’s better not to think but this is reality/Build a wall around you and pray for your soul.“ Well, we thought that’s what most people did anyway. Throughout the record, the two artists are almost laughably sincere about lyrics such as „Tears are the diamonds of soul/Please don’t be ashamed of crying,“ and you might end up feeling a little sorry for them, meaning so well and achieving so little. But what would you expect from a guy who thanks, apart from his several family members and friends, the „dear public,“ his dog, and life itself in the liner notes?