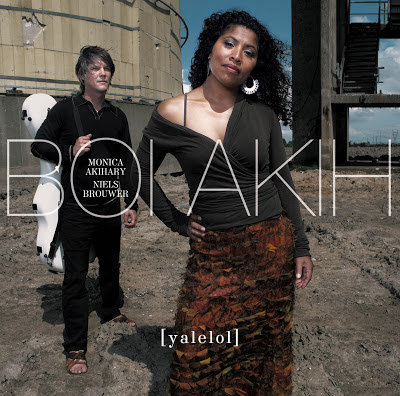 For their fifth album, YALELOL, Boi Akih stripped their music down to its two most basic elements: Monica Akihary’s vocals and Niels Brouwer’s acoustic guitar. Unfortunately, YALELOL is an album you’ll end up wanting to like much more than you actually do. Reading the liner notes — which explain how the group chose the „most intimate form to present their music,“ and which detail how the sound engineer miked up the duo’s living room with analog equipment — you can’t help but wish that the group had recorded the intimate living-room session that the booklet describes. But with the perfectly clean sound and the tastefully balanced mix, the two might as well have recorded in the high-tech digital studio environment they were trying to avoid. The record’s bigger problem is its languidness, however: it had to be expected that the songs would be sketchy and have an improvised feel, but much of the album sounds simply unfinished and aimless. The whole affair is so low-key that the music often simply doesn’t seem to move, and it doesn’t seem to go anywhere — which wouldn’t be so bad if the given moment was inspired enough. Some of the songs work better than others — on „Moku Wa’a Ielea“ there’s a sweet harmonic flow between the two performers, while „Pameue Yalelol“ (which the booklet helpfully translates to „sharpen the not physical being“) has more drama and is more evocative than the other tracks. But on the whole, the album doesn’t quite manage to convey any kind of spark. In theory, the group’s mixture of Akihary’s Haruku lyrics with jazz, blues, and all kinds of different world music idioms is fresh and interesting — but here, its qualities are more vaguely suggested than actually heard.