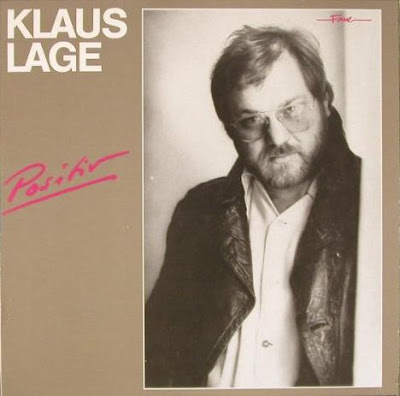 In late 1981 and early 1982, Klaus Lage recorded POSITIV (Positive), the follow-up to his promising but ultimately uneven self-titled debut. Working with a steady band called Druck (which translates to either „Pressure“ or „Print“), Lage’s mixture of singer/songwriter pop and earthy rock is more homogenous this time around; especially evident in the title track and „Der Mann ohne Komma,“ which could easily be part of Huey Lewis‘ bar band repertoire. Most of the songs are driven by guitar and piano, but on some occasions, keyboards give the compositions a more definite early-’80s feel. As on the debut album, the majority of the songs are humorous on the surface, but often enough, they tell stories of melancholy and frustration underneath, and they’re populated by losers and by everyday people struggling with life. This is most obvious on the more balladesque „Nie wieder 13 sein“ (Never Be 13 Again), a portrayal of an unexciting teenage life at an age where you feel alone even when there are so many people around you („Der Fernseher war sein bester Freund/Doch dem kann man nichts von sich erzähl’n“ — „TV was his best friend/ But you can’t tell it anything about yourself“). It’s also present in the opening track, „Dann kamst du“ (Then You Came), where the protagonist is rescued from a life of hanging out alone in bars by a woman, but he isn’t as much joyous as he is thankful to be eating health food and going to bed before midnight for her. On „Unterwegs“ (On the Road), about a musician’s life on tour, Lage sings about all the cities and places he’s played in, and almost off-handedly, there’s a verse about a girl who doesn’t stay in his life for very long („Ich sprach von Liebe/Du hast gelacht“ — „I spoke of love/You laughed“). Even the funny literary homage „Bukowski“ features a bunch of sad characters. And then there’s „Komm halt mich fest“ (Come and Hold Me Tight), Lage’s first substantial hit, about a lover’s reunion after a period of separation. The song is Lage at his best: a perfect pop song with a chorus that’s catchy in a way that’s never annoying, this subtly melancholy mid-tempo ballad shows Lage’s gift for writing lyrics that tell everyday life stories in simple words that always find a way around cheap sentimentalism — when the ex-lover returns to the protagonist’s apartment, he advises her: „Trink nicht den Kaffee, der ist schon zu alt“ — „Don’t drink the coffee, it’s too old,“ which, in a completely unsentimental way, gives you a perfect idea of how the guy’s life fell apart. All in all, POSITIV is a more consistent effort than Lage’s debut, and it shows a songwriter who’s becoming more confident of his craft, and even though it’s not a brilliant album and not all of the songs are essential, it’s a solid record for Lage aficionados and newcomers alike.

This review was written for the All-Music Guide on January 5, 2008.