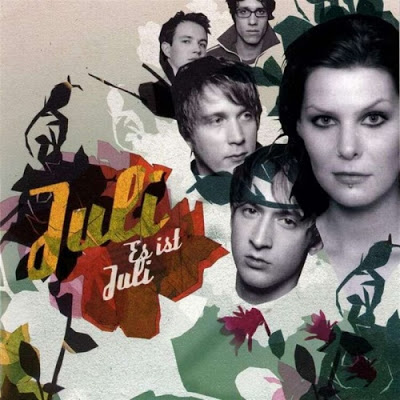 Juli are like a placebo. It’s that simple. The Germany-based pop/rock band appeared on the scene shortly after Wir sind Helden’s 2003 debut paved the way for German-language pop groups (especially those fronted by a woman), and they managed to sell half a million copies of their debut album on the strength of two hit singles, but that doesn’t mean their music is in any way compelling. Juli’s music is so thoroughly middle-of-the-road, so perfectly bland, and so determined not to offend the listener in any way that the result leaves no taste behind whatsoever. The album has 12 songs, all completely formulaic — indie pop verses, anthemic rock chorus, pseudo-introspective lyrics — and the two singles („Die perfekte Welle“ and „Geile Zeit“) are indicative of the rest of the album. There’s even the obligatory piano-based ballad at the end of the album, and singer Eva Briegel’s voice could be easily mistaken for Wir sind Helden’s Judith Holofernes in the more introspective moments. Now, none of this would be fatal — pop music doesn’t have to be innovative, and is often formulaic enough and middle-of-the-road — if the group had any identity of its own, but anybody could sing these songs: the fact that the band performs a German version of Ashlee Simpson’s „Autobiography“ (called „Tränenschwer,“ i.e. „Heavy with Tears“) without any kind of twist or freshness is a case in point. Yes, the band is professional, able to deliver solid backing, but they also sound completely interchangeable. Which brings us back to the placebo comparison: Juli sound like rock, but they lack the style’s wildness and unpredictability (instead, they’re just loud, with compressed guitars on the chorus); they sound like songwriters, but their lyrics are uninspired and generic in their evocation of melancholy end-of-relationship feelings; and they sound like pop, but they lack the uniqueness of a truly compelling pop act. Which ultimately means that Juli aren’t terrible to listen to, and they’re professionally crafted, but they’re also completely uninspiring.

This review was written for the All-Music Guide on September 11, 2007.