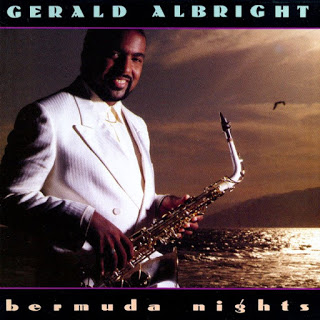 Smooth jazz usually enjoys a bad reputation with critics, who tend to complain that the music is shallow and bereft of any personality. It’s thanks to albums like Gerald Albright’s BERMUDA NIGHTS that this style is often dismissed. There is virtually nothing on the album which is actually worth hearing. Sure, Albright’s saxophone playing is competent, but he shows little excitement and even less personal style. The backing musicians include session cats such as drummer Harvey Mason and guitarist Paul Jackson, Jr., but they do not add anything to the proceedings. Basically, the songs tend to sound alike, and even though most feature different musicians, all of them offer the same pseudo-lush plastic-keyboard approach. There are many smooth jazz albums which show that the genre is not as terrible as critics pretend, but BERMUDA NIGHTS certainly doesn’t fall into this category. This album is in its essence an inoffensive piece of fluff, recommended only to fans of Albright — who would later record better smooth jazz albums himself.

This review was written for the All-Music Guide on September 6, 2002.