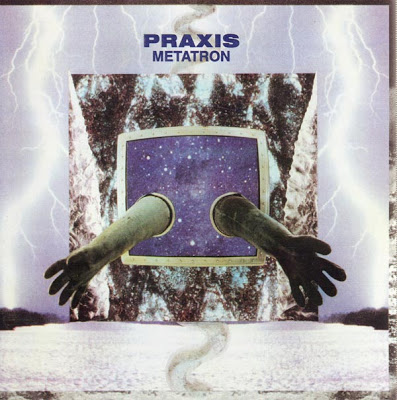 For the third manifestation of Praxis, Bill Laswell returned from the cut-and-paste trash metal of the second album, SACRIFIST, to a band approach, as on the first, TRANSMUTATION. Concentrating on the core band of Buckethead, Brain and himself, he created an album which is close in spirit to the first one, but covers very different ground, and is also much weirder. From the touching opening ballad „Wake the Dead,“ we are in for a ride through everything Praxis has done before and much more: slow death metal riffs with damaged soloing on „Skull Creek,“ dub explorations on the relaxed „Cannibal“ and the creepier „Warm Time Machine/Low End Transmission/Over the Foaming Deep,“ or mind-blowing shred guitar on „Turbine“ and „Triad (The Saw Is Family)“ — the latter track toying, just like „Meta-Matic,“ with the listener’s expectations by employing one killer riff after another without ever developing the way one expects. Calm interludes like „Cathedral Space“ (hints of COLMA) and the haunting „Double Vision“ are included, as well as mysterious voice samples („We Are Not Sick Men!“) and some doses of Buckethead’s typical silliness — „Armed (TSA Agent #5)“ has him playing the melody of „Jingle Bells“ with a hilariously distorted sampler guitar, while „Warcraft (Bruce Lee’s Black Hour of Chaos)“ features kung fu screaming (an interesting connection to Yamatsuka Eye’s performance on SACRIFIST). On „Inferno/Heatseeker/Exploded Heart,“ Buckethead switches to electric bass and delivers a fascinating duel with Laswell. Throughout the album, Buckethead is awe-inspiring, playing not only with lightning speed and enormous precision, but also with dangerous intensity. The other two musicians are excellent as well, but the spotlight is clearly on Buckethead. The production, however, is the record’s second star: there are interesting sounds abound (drilling sounds, oscillators, wind etc.), and each track (and virtually every guitar part) has a sonic identity of its own. METATRON is an incredible album (although beginners should start with TRANSMUTATION) and easily one of Buckethead’s best showcases.

This review was written for the All-Music Guide on March 9, 2000.