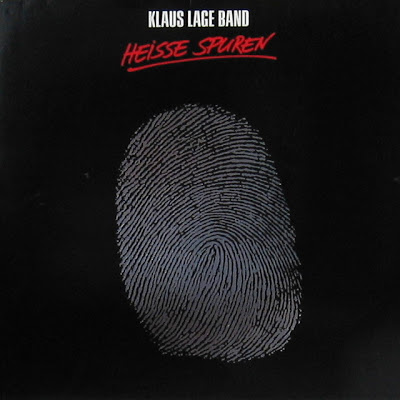 What a disappointing follow-up to Klaus Lage’s SCHWEISSPERLEN, which featured a number of successful singles and showcased a talented and confident musician and songwriter. HEISSE SPUREN, recorded a year later with the same band and with the same producer, tries hard to replicate this success, but it’s a much more uneven collection of songs. First of all, the album doesn’t sound very appealing: if SCHWEISSPERLEN was a product of the ’80s, then HEISSE SPUREN is that decade’s victim. With booming drums, cleanly distorted guitars, sterile keyboard sounds, and an overall sense of overproduction, many of the songs have little room to breathe, and the plastic ’80s rock sound reminds you why grunge and alternative rock had to happen. Of course, the Klaus Lage band has always been an earthy one anchored very much in the mainstream, but on HEISSE SPUREN, the production often threatens to suck the life „out“ of the songs.

What amplifies the problem is that the songs aren’t very exciting: Lage, who co-wrote most of the lyrics with a certain N. Heirell (which may or may not be a pseudonym for Dieter Dehm), has again penned a number of relationship tales, but many of the lyrics are bland and uninteresting, as in „Zuviel Allein“ (Too Often Alone), or the one-night-stand-turns-into-something-else song „Stille Wasser“ (Silent Waters). On SCHWEISSPERLEN, Lage’s songs always told a story, and the relationships they discussed were often complicated — here, the singer’s tales of jealousy and falling in love are often one-dimensional and generic. „Istanbul,“ a story of xenophobia, means well, but its effectiveness is diminished by lines such as „Tränen auf dem Mantel / sehen im Morgen aus wie Frühtau“ („Tears on the coat / look like dew in the morning“), which are downright kitsch.

Some of the songs are still worthwhile, though: „Faust auf Faust,“ a single written for the movie SCHIMANSKI: ZAHN UM ZAHN (the first theatrical spin-off of the successful German TV crime series TATORT), was a massive hit, and while its story of a tough guy with a soft spot for a woman is a bit clichéd, the song is catchy and energetic. „Out“ is an ironic funk song where everything from rap to cocaine, from breakdancing to political parties, is declared „out“ (after the piano solo, Lage says that the Lage Band and piano solos are „out,“ too). „Weihnachtszeit“ (Christmas Time) has a more interesting story than the other songs, but the music with its chiming bells is tough to swallow. „Vermisst“ (Missed), co-written by former (and future) band keyboardist Danny Deutschmark, is more subtle musically, and there’s a slight bitterness in the lyrics that makes the song more complex. Truth be told, if SCHWEISSPERLEN hadn’t been so good, then HEISSE SPUREN wouldn’t be so disappointing. The album isn’t a disaster, and it’s not a complete failure — but it’s the first album where Lage’s confidence was much stronger than his songs.