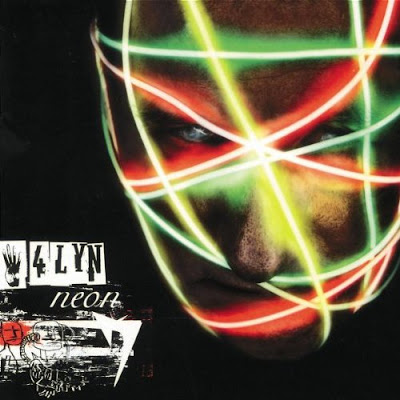 When Germany’s 4lyn released their debut album in 2000, numetal was just experiencing its breakthrough with releases by Limp Bizkit, Korn, Papa Roach, and several other groups. The fact that 4lyn almost slavishly followed the American blueprint made most critics sneer, but it helped the group to ride along on the genre’s wave of popularity. When the band released their sophomore effort, NEON, in 2002, numetal had become a world-wide phenomenon, with dozens of best-selling releases (plus seemingly hundreds of lesser-selling records) by second- and third-generation bands. Every country, it seemed, now had at least one numetal band, and the Hamburg-based 4lyn studied their idols well enough to become a part of the game: Limp Bizkit’s rap-rock formula and Korn’s detuned guitar riffs are obvious touchstones, but the group also encompasses (hed) p.e.’s punk outbursts and Crazy Town’s vocal style — not to mention the angsty lyrics and the weirdo image that were quickly becoming a stereotype. The reviewers weren’t impressed by the album, and while numetal never was a style that found much recognition with critics, the genre’s major players at least earned some grudging respect among them after a while.

Listening to the album in retrospect, NEON is almost a parade of clichés, and it hasn’t aged particularly well. The group has all the ingredients, and they know how to work a groove — „Shelltoes & Fatlaces“ and „Me vs. Me“ are cases in point — but their writing is uninspired, rarely amounting to much more than just sound and fury. Only a few of the songs are memorable („Deadnekk“ and „Pearls & Beauty“), the rest blurs into an amalgam of bland anger and generic riffs — a fact that is somewhat glossed over by the high production values. Braz, the group’s singer (yes, they even adopted funny nicknames!), has a whiny, nasal voice, and it quickly becomes grating. He incorporates all the familiar elements — from (mediocre) raps to (tuneless) singing to (powerless) yelling — but when the album’s sole instrumental track („Neon“) is a relief to the ears, you know you’re in trouble. Even worse are the simplistic lyrics: there is uninspired boasting, an ode to pot, an aimless celebration of individualism („I’m so happy that I’m not like you/Fuck the standard, fuck the rest/I’m an original“), and even a maudlin declaration of love. Truth be told, a lot of numetal bands were lacking in the lyrical department, but (hed) p.e.’s Jahred at least knows that he’s spouting absurd chauvinistic non-sequiturs and seems to be having fun with his over-the-top rants. 4lyn are all serious: in their uninspired appropriation of the genre — complete with American accents and pseudo-hip spelling — they feel like a kid dressing up as a cowboy for a party and then claiming they’re the real thing. NEON isn’t terrible — it is just unnecessary.

This review was written for the All-Music Guide on August 26, 2007.