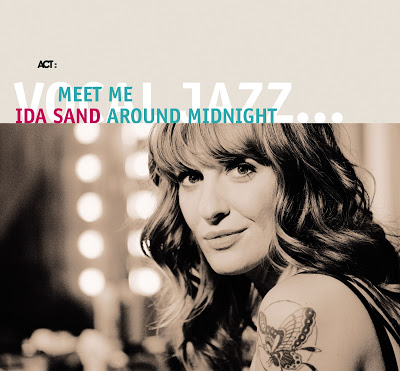 29-year-old singer and pianist Ida Sand didn’t feel rushed to start a solo career: Born into a musical family — her father was an opera singer, her mother a church musician — she studied music in Stockholm and then worked with a large number of Swedish musicians, honing her skills. One of these musicians was Nils Landgren, who gave Sand ample opportunity to show her talent on the latest release of his Funk Unit, LICENCE TO FUNK, and now that she has finally recorded an album under her own name, Landgren is on board as a producer and also guests on a number of songs. MEET ME AROUND MIDNIGHT is a vocal jazz album deeply influenced by blues and soul, and Sand’s experience as a musician shows: she has an earthy, expressive voice, but she never feels the need to push it into the spotlight — where other young singers make every song a showcase for their undeniably impressive technique, Sand is refreshingly relaxed and focuses on the songs, not on herself. Most of the tracks are covers, and they have been selected from a wide range of sources: Sand performs two Stevie Wonder songs („Feeding Off the Love of the Land“ and „Higher Ground“), the Eurythmics composition „Here Comes the Rain Again,“ Nancy Sinatra’s „Bang Bang,“ a Lightnin‘ Hopkins song („Baby Don’t You Tear My Clothes“) and the old Arlen-Mercer song „One for My Baby“ (made famous in versions by Frank Sinatra and Etta James). She finds a fresh arrangement for most of these, some more acoustic-based, with piano, bass, drums, and vocals as the main ingredients, and others more electric, giving them a bluesy touch with guitar and electric piano. Sand’s own composition „Brutal Truth“ is one of the album’s highlights, a funky R&B song with a soulful groove, and her beautiful piano ballad „Home“ quietly ends the album. Not every song on MEET ME AROUND MIDNIGHT is a standout, but even the less exciting arrangements („At Last“) are performed skillfully enough to make the album work as a whole. Sand is a promising new talent on the music scene, and with her subtle feel for dynamics, MEET ME AROUND MIDNIGHT shows more sophistication than you’d expect from a debut album. It’s simply a good listen all the way through.

This review was written for the All-Music Guide on November 8, 2007.