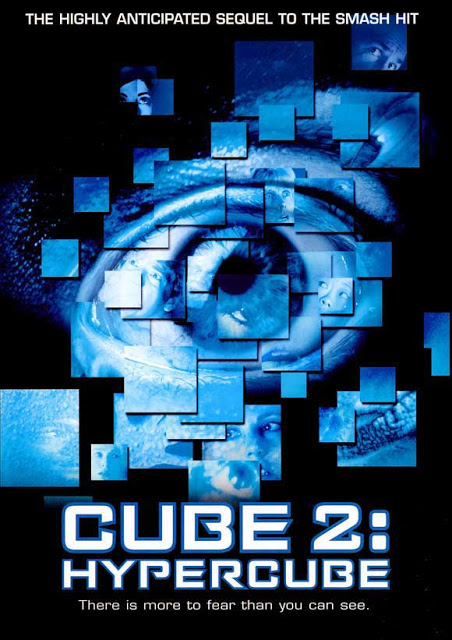 The following text was written on in the night of July 31, 2002, after seeing the world premiere of CUBE 2: HYPERBUCH in Munich. The review was published on Ain’t It Cool News; it was probably the very first online review for this movie.

I just came back home from the world premiere of CUBE 2: HYPERCUBE in Munich. I have to say that I didn’t have huge expectations – I thought the first film was brilliant, a highly original movie with a nod to Borges‘ „Library of Babel“ story, minimalistic and highly effective. While I was very curious how they would follow up a movie like this, sequels rarely are as creative as the films which preceed them – some even manage to ruin what was before, as did HIGHLANDER 2 with its „explanation“ that the immortals were actually aliens from another planet.

But every once in a while, a sequel comes along which is actually worth seeing. HYPERCUBE is one of them. It takes the original idea of the first movie – people stuck in a maze consisting of empty rooms, each one featuring six doors leading to a similar room – but is otherwise completely unrelated. The beginning of the film is familiar territory, but it quickly moves in a completely different direction. Whereas the first movie presented us with a cube that could be real, the second one becomes surreal and – WARNING: SPOILERS AHEAD – has a virtual cube where, basically, everything is possible.

Now, I’m not a mathematician, but the whole idea of a four-dimensional cube is a mindbender (although I believe that hypercubes actually exist as theoretical constructs). In CUBE 2, different rooms have different timelines, a different gravity or even a different reality. You can meet yourself, or you can move horizontally into another room and suddenly fall downwards since the gravity in the other room is different. You might see things that will happen, or could happen, or have already happened. Now, I’m trying not to give away too much here – but the film becomes more and more surreal as it goes along, and it finds a certain humor in its bizarre premise – for example, when one character keeps killing another one whom he meets over and over again. 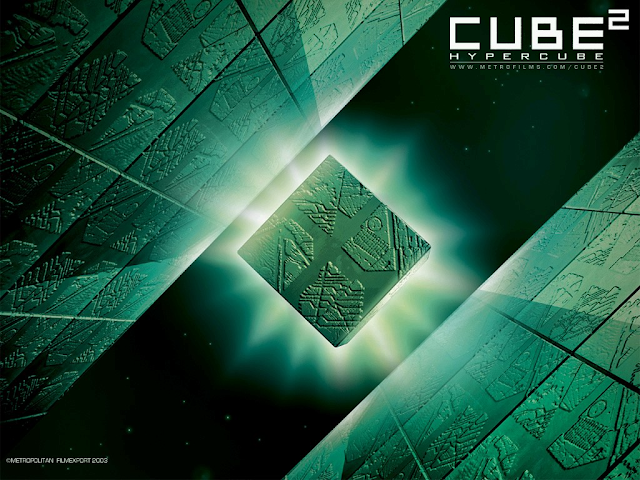 There are certain parellels to the first movie – the mix of characters is similar, with a confused old lady replacing the disturbed young man from the first film. There’s a latent psycho, a person trying to reason, a cynic – the characters seem familiar. Again, you have various hints at what the cube might be, and again, the people who are trapped in the maze have some connection to their prison. While the first film had an open ending, the second one is more definitive – although I found the ending quite frustrating.

Director Andrzej Sekula (who worked as a cinematographer on AMERICAN PSYCHO and PULP FICTION) does a great job here – he has a nice way of teasing the audience by withholding visual information: a character sees something, reacts to it, but we can’t see it right away. There are some nice visual effects, I particularly liked the camera angles when moving into different rooms which had different a gravitational characteristic: the camera stays the way we used to see the first room, so that in the next room everything seems to be upside-down or turned 90° to the left. It nicely represents the feeling of dislocation the characters must experience. Only after a while, he spins the camera, just as the characters get used to the altered gravity. 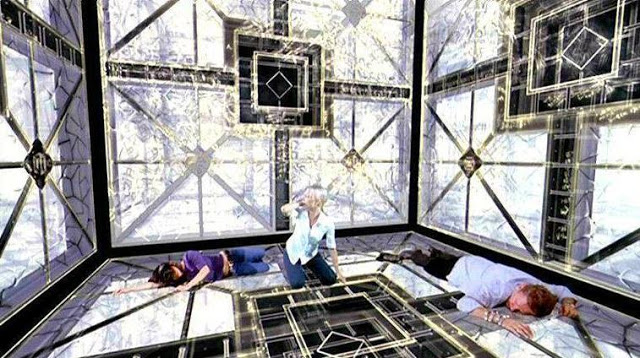 The cast consists mainly of unknown actors – at least I have never heard of any of them, even though, as the IMDB tells me, most of them have appeared in various other movies and TV series before. They’re all convincing, and the fact that they’re not exactly famous actually helps to create the illusion that these are really normal, everyday people who suddenly find themselves trapped in this cube.

What more can I say? As you will have noticed already, I hugely enjoyed HYPERCUBE – while its premise isn’t as original and brilliant as the first movie’s basic idea (naturally), it goes into a completely different direction and keeps throwing new ideas and bizarre situations at us to keep our heads spinning. It’s very well done, repeating the minimalistic feel of CUBE. The only criticism I could aim at it is that once you figured out that, in this cube, anything goes and nothing really matters, you sort of stop caring about the individual characters. Still, the movie quickly makes up for that by increasing its pace; things begin to become so abstract and bizarre that you wonder what they will come up with next.