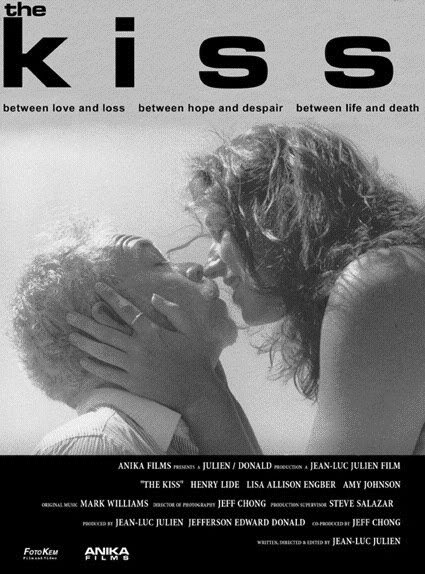 I wrote the following review of Jean-Luc Julien’s short film THE KISS (2000) as an IMDB user comment back in 2004. The film has been made available online since then and can be watched below. Also, check out the interview with Jean-Luc at alexfotografiert.de (here) and Jean-Luc’s video commentary for the film (here).

A small, but powerful film.

This little-seen short film is a small gem. Shot in black & white, completely without dialogue, it tells the story of a man (Henry Lide) sitting on a beach, desperately drinking gallons of whiskey to prepare himself for his suicide. A few moments before he pulls the trigger of his gun, however, an angel emerges from the ocean and rescues him.

Julien’s images are powerful, and he skillfully shows how the man’s world spins out of control: the first few frames are calm and peaceful, but then, as we begin to sense the man’s desperation, the film becomes quite unsettling – perfectly accompanied by Mark Williams‘ score, which introduces dissonant guitars to underline the man’s emotions. When the man is saved by the angel, everything becomes calm again, and the film ends with a beautiful shot of Lide watching the ocean, seemingly disappearing in its vastness.

The beauty lies in the details: The story suggests enough to intrigue the viewer, but it never spells out why the man wants to commit suicide. We see him burying a photograph of a woman in the sand – is it the same woman who emerges from the sea? Also notice how Lide’s face is never seen in its entirety until the very end, when the angel takes off his cap and kisses him.

Julien has created a powerful, intriguing film – 8½ memorable minutes of storytelling. If you get a chance to see it, do so by all means.